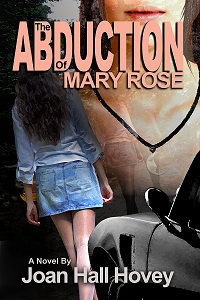 The Abduction of Mary Rose
A suspense novel interwoven with threads of romance and paranormal.
Imagine discovering everything you believe about yourself to be a lie. And that the truth could stir a killer from his lair.

Following the death of the woman she believed to be her mother, 28-year-old Naomi Waters learns from a malicious aunt that she is not only adopted, but the product of a brutal rape that left her birth mother,  Mary Rose Francis, a teenager of Micmac ancestry, in a coma for 8 months.

Dealing with a sense of betrayal and loss, but with new purpose in her life, Naomi vows to track down Mary Rose's attackers and bring them to justice. She places her story in the local paper, asking for information from residents who might remember something of the case that has been cold for nearly three decades.

She is about to lose hope that her efforts will bear fruit, when she gets an anonymous phone call.  Naomi has attracted the attention of one who remembers the case well.

But someone else has also read the article in the paper. The man whose DNA she carries.
And he has Naomi in his sights.

"Hovey’s The Abduction of Mary Rose was disturbingly satisfying. Naomi’s resilience and the strength which she managed to acquire were inspirational. Also, the author allowing readers to peek inside the mind of a sociopath was riveting. The cold madness which he displayed was masterfully crafted. Even though his character was well tailored, the relevance of the other characters cannot be annoyed, the way in which the other characters were incorporated, allowed the story to flow well. They added the components which led to Naomi achieving justice. The Abduction of Mary Rose was well worth the read and I hope that Hovey once more invites readers into Naomi’s world." ~ Kellie, You Need to Read, You Gotta Read Reviews

Please stop back on March 19 for a blurb by Jamie Hill.