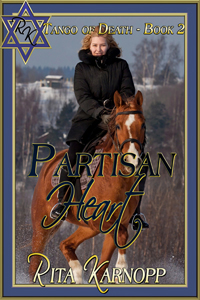 PARTISAN HEART - Book 2 – Tango of Death Series - Poland 1943-During WW II resistance movements  occurred in every occupied country by a variety of means, ranging from propaganda to outright warfare and the recapturing of towns, as well as hiding crashed pilots.

Partisan Heart tells the story of a Gypsy girl who follows her beloved into the forests of Poland and the Ukraine.  Their partisan group is willing to risk their lives blowing up train trestles, attacking SS killer squads, and to infiltrate Nazis intelligence to destroy Nazi Germany.  Resistance does exist.  If nothing else, to die with dignity is a form of resistance.
http://www.amazon.com/dp/B00AZ6VTFE/
http://bwlpublishing.ca/

Excerpt:
“I am a Jew fighting for his people and I’m fighting for your people, too. I don’t need you fighting me.” He opened his arms to her.
Vanya moved into his embrace. After a long silence she lifted her face up to him and took his hard kiss. She responded with urgency and passion. He fueled the fire within her and she didn’t want to stop.
He kissed her cheek, then moved to nibble on her ear lobe.
“I love how you kiss me,” she said somewhat breathless.
He answered with a trail of kisses down her neck . . . lower and lower.  She allowed him to pop open the first few buttons on her blouse. He pinned her back against a tree and buried his face into her cleavage. The sensation shook her to the core.     She should tell him to stop, but she truly didn’t want him to.
How or when he slipped the remaining buttons free, she couldn’t say.

Watch for JEWISH SOUL, book 3 of the Tango of Death Series . . . coming soon - Mayla decides it’s up to her to do whatever it takes to find her twin, Vanya, and baby sister, Zilka ~ before the Gestapo sends them to a concentration camp or the SS kills them.

Stop back by March 15 for a blurb by Roseanne Dowell!
Posted by Sydell Voeller at 8:06 AM