A Few Lines From Jude Pittman

A Few Lines From. . . Jude Pittman

A Few Lines From Deadly Consequences by Jude Pittman:
A shot rang out from the direction of the stables. Kelly leapt out of his chair, grabbed the gun out of his jacket pocket and slapped the screen door open.

“What the damn hell?” He yelled as he raced towards the brood barn, where Jake, alerted by the gunshot, stood in front of the closed doors barking like a beast gone rabid.

“Easy boy,” Kelly said, approaching the door with his weapon drawn. “Gilly, you okay in there?” Kelly reached the door and pulled the handle. It held fast. Someone had apparently locked it from inside. 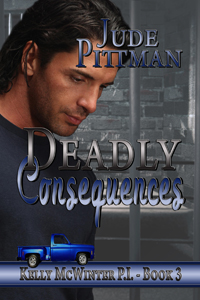 “Gillian?” Kelly called in a voice laced with fear and Jake once again started his frantic barking.

“Okay. Stand down.” Kelly spoke to the dog, then placed his ear against the door and listened.

From inside came the sounds of sobbing.

“Gillian.” Kelly yelled again. “For God’s sake, open the door.”
http://www.amazon.com/Deadly-Consequences-Kelly-McWinter-ebook/dp/B008ZQTPK2/
Stop back next week for a few lines from Jamie Hill.
Posted by Sydell Voeller at 7:28 AM No comments:

Mayla watched the girls head for the bushes.  She turned toward the men.  “If nothing else, everything will be worth it if we manage to save their lives.  If any of us is captured, we must die before breathing a word about the twins.”
She stretched out her hand and Chester placed his on top and Stane placed his below.  “In the midst of all this evil . . . this is our one good.”  Mayla smiled as they nodded in agreement. Posted by Sydell Voeller at 5:32 AM No comments:

Reclaim My Heart by Donna Fasano 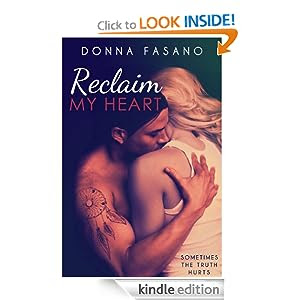 Sixteen years ago, Tyne Whitlock cut all ties to her past and left town under the shameful shadow of a teenage pregnancy. Now her fifteen-year-old son is in trouble with the law and she is desperate for help. But reaching out to high-powered attorney Lucas Silver Hawk will tear open the heart-wrenching past in ways Tyne never imagined.

Forced to return to the Delaware Indian community where Lucas was raised, Tyne and Lucas are tempted by the heated passion that consumed them as teens. Tyne rediscovers all the reasons she found this man irresistible, but there are scandalous secrets waiting to be revealed, disgraceful choices made in the past that cannot be denied. Love is a powerful force that could heal them both—if the truth doesn't rip them apart.
Buy Link:   http://www.amazon.com/gp/product/B00CQ5YROW/ref=docs-os-doi_0
Posted by Sydell Voeller at 5:06 PM No comments:

A Few Lines from Lisabet Sarai

A Few Lines from ... Lisabet Sarai

A few lines from Exposure, by Lisabet Sarai.... 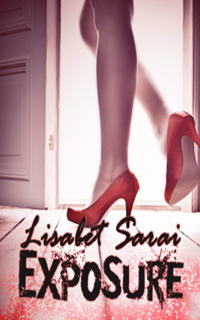 The back door, I discover, is unlocked. I’m one hundred percent certain I didn’t leave it that way. Carefully, keeping my body behind the door, I scan the yard. The light filtering from the kitchen windows is bright enough for me to see that there is no one in my little square of turf. It also shows me crushed tomato plants and bean vines torn from their trellises, clearly marking the intruder’s escape route.

At that point, my rage finally overwhelms my fear. I pour myself a finger of scotch and sit at the kitchen table, simmering in helpless anger and vowing some kind of revenge.

Then a horrible thought crosses my mind. Jimmy knew I would be out tonight. He was the only one who knew. Was it possible that he was involved in all this, somehow? Is it possible that smiling Jimmy might have betrayed me?

The balance shifts again. Shudders shake my body. Sitting alone under the fluorescent lights, gripping my drink, I am paralyzed by the realization that I don’t know who I can trust. If anyone.

Please come back next week for A Few Lines From. . . Rita Karnopp.
Posted by Sydell Voeller at 8:38 AM No comments:

A few lines from Gail Roughton

The Dark Series:  The Color of Seven

He walked up to a little backwoods Alabama black Church. Seven Cedars Baptist. It stood right outside Seven Cedars, Alabama. He laughed. “Be you de sebbenth son of a sebbenth son, boy?” Well, maybe he was, maybe he wasn’t. Sounded good, though. He went inside to join the ongoing service. Within a month, he’d collected a group of ten or so of the black community’s finest young men. He met with them down by the banks of Seven Cedar Creek.

Please join us again on May 17 for a few lines from Lisabet Sarai!

Posted by Sydell Voeller at 8:15 AM No comments:

A Few Lines From Ginger Simpson

A Few Lines From. . . A Novel Murder by Ginger Simpson

“God, you sound just like Tony. Relax. Not right at the moment, but as soon as our current cases are solved. I can’t walk away when women...one of which I’ve met, are losing their lives.”

“So, have you really thought this through?” 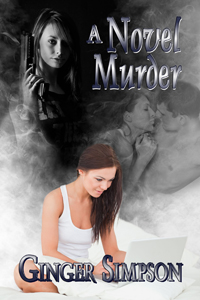 “You have no idea. I actually made some progress on my novel tonight, but my muse isn’t cooperating because I can’t stop thinking about Kitten and Persia.”

“When did you get cats?”
“Oh, Nay. Those are the stripper names of the two dead women.”

“Hmm, yeah now I remember. Sorry, guess I had a memory lapse. So more about this resignation thing...”

“I have my writing to fall back on, and my editor thinks this next story is going to be the one that makes me big bucks. I’m making out pretty good on the first, but I love to write, so being free of the force will give me the time I need.”

Stop back next week for a few lines from Gail Roughton.

Posted by Sydell Voeller at 2:55 PM No comments: