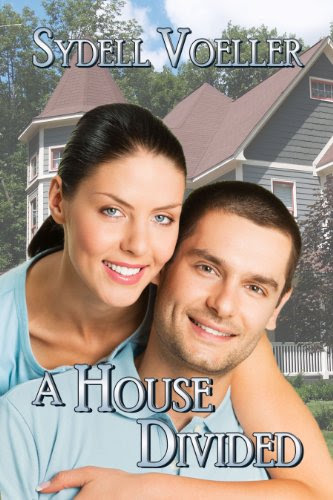 A House Divided, by Sydell Voeller, only 99 cents!

Save $3 today on this Kindle Countdown Deal!

"Rebecca and Mark do find themselves attracted to each other, however, and struggle with their conflicting feelings. Sydell Voeller's descriptions of characters and setting bring the story to life and leave a lasting impression. A twist in the plot comes as a real surpise, but fits the story. Highly recommended! " -- Amazon reviewer

Rebecca Lorenzo, the young widow of a Hollywood actor who was killed by a crazed fan, is struggling to raise their young daughter, Wendy. Rebecca is embittered that God allowed her precious husband to die. She has turned her back on Him. Rebecca and Wendy move from L.A. to Rebecca's hometown on the Oregon coast.

Due to a miscommunication, Rebecca mistakenly believes she can buy a Victorian house there. She hopes to cocoon herself in the security of her "safe" hometown. Rebecca meets the handsome, enigmatic homeowner, Mark Simons, and learns of his plans to tear down the house. Mark, a psychiatrist, is attempting to raise money to build a halfway house on the property, and he is admittedly a workaholic. He believes this project is God's will for him. Mark refuses to budge when Rebecca approaches him about selling the house. As Rebecca and Mark struggle to battle their individual demons from the past, they also struggle to resist their growing love for each other.

Posted by Sydell Voeller at 8:56 AM