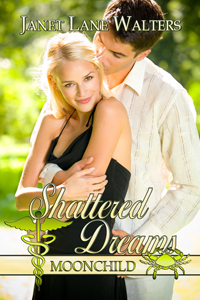 
* * *
“Manon!” Rafe Marshall leaped from the examining table in time to catch her before she hit the floor. He cradled her against his chest. “Didn’t mean to scare you,” he whispered. Why did she think he was dead? He knew news of his accident had been kept quiet because the police believed he’d been deliberately forced off the road. Who had told her? Had the informant been the driver of the dark car his rescuer had seen speeding from the scene?
Find Shattered Dreams here:
http://www.amazon.com/Shattered-Dreams-Moonchild-ebook/dp/B00DPZT6K2/
Janet can be found daily at http://wwweclecticwriter.blogspot.com/
Stay tuned. Next week A Few Lines features Jane Toombs...
Posted by Sydell Voeller at 8:01 AM