Good morning, everyone!  I'm excited to announce that my most recent contemporary sweet romance, The Heart Leads Home, published by Books We Love, has gone live this weekend.  This book is truly a "book of my heart"! 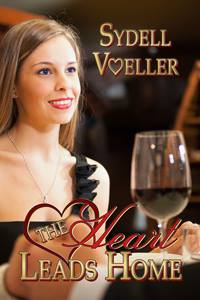 Sarah Pendleton, a first grade teacher in Portland, Oregon, feels duty-bound as she returns to her hometown of Mistletoe Valley--and to her conflicted past. While growing up in her small, rural community Sarah lived with her grandparents, who served their community well--especially her grandfather, a pastor. Yet Sarah despised being the “perfect preacher’s kid” in a small town where everyone knew everyone else’s business. Rebellious, she fell for a stereotypical “bad boy” during high school and after graduation, they married. When they learned she was pregnant, he left her for parts unknown. Unable to support the baby, Sarah gave her up for adoption, yet ever since, guilt has consumed her. She believes she doesn’t deserve to have a second chance at being a mother again.

Now a decade later, she is the sole inheritor of her grandparents’ estate. She must decide whether to sell the property, or make the painful choice of staying in a town where folks remember her rebellious past.

She meets the strikingly handsome real estate agent Rich Stevens. He also works as a youth pastor at the church where her grandfather had served. Her attraction to Rich is immediate and powerful, but she’s faced with not one, but two prickly thorns: He is a grieving widower, and his 8-year-old daughter, Carly, is grieving too. He believes that there can never be another woman in his life, and he can succeed in raising his daughter alone.

Sarah grapples with her own push-pull feelings for Rich. Should she hire him to sell her grandparents’ property, knowing full well he’s more than just a business acquaintance to her? Should she stay in Mistletoe Valley, or go back to her job in Portland? The truth is, if she were to fall in love with him, a man of the collar, she’d be right back to where she started as a child—struggling in vain to live up to others’ expectations. Worse, Rich’s daughter, Carly, is the embodiment of the baby she left behind, and if Sarah allows herself to get too close to Carly, that would only complicate her feelings for Rich.

Can Sarah and Rich overcome their personal demons and making a lasting commitment to each other? Can the two of them—plus Carly--become a forever family?

An excerpt from the book


“I can’t do this,” Sarah Pendleton said aloud, though she was the only passenger in the mini-van. Her neck muscles knotted as she followed the meandering country lane to her grandparents’ home. A mid-October haze washed over the golden hillsides that enveloped the small town of Mistletoe Valley, Oregon. White puffs of clouds scudded across an azure blue sky, yet the unspoiled beauty only underscored the irony of it all. How will I manage? There are so many memories...I can’t bear to face them.

She approached the top of the grassy knoll where the two storied white house emerged into view. Fresh recollections, poignant and bittersweet, washed over her. Her childhood, the place where she grew up.

Sarah swallowed against the lump in her throat. Buck up, girl. You’re 28, a grown woman now...

Sarah opened the van door and got out. She dreaded having to face the emptiness, the silence, the realization that life for her would—could—never be the same. Her grandmother had passed away the preceding June, and Sarah missed her dreadfully.

Inside the house, Sarah blinked rapidly, allowing her eyes to adjust to the dimness. The only sound was the drip, drip of the faucet in the bathroom off the hallway. The place smelled musty, closed-up. A shaft of sunlight slanted through the partially opened blinds of the living room, catching a dust mote.

“Ouch!” An ear-shattering thud from somewhere in the back of the house splintered through Sarah’s thoughts.

She froze. Her heart pounded.

Footsteps sounded. They drew nearer. Her fear escalating, she wasn’t sure whether to stay or bolt. Before she could do either, a man wearing a white polo shirt and khaki trousers limped into view, then stooped to rub his knee.

“W-who are you?” she blurted. Every nerve ending stood on alert.

“Sorry...” Still rubbing his knee, the man looked up and smiled—or was it a grimace of pain? “I tripped over that darn apple crate in the utility room. Not sure how I missed seeing it.”

Her heart pounded. “I said who are you? And how in the world did you get inside my house?”

He straightened to his full height, 6 feet or so, Sarah guessed. His thick blond hair was close-cropped. His brown eyes—warm, dark pools—met hers, and she repressed an unexpected shiver of awareness. “I’m Rich Stevens, the broker at Anderson Realty.” He held out his hand. “And you must be Sarah. Sarah Pendleton.”

“Uh...yes. Yes, I am.” She shook his hand, hoping he didn’t notice how badly her own hand was trembling.

“Sorry again if I caught you off guard.”

“No problem. It’s just...just that I wasn’t expecting to find another person here so soon. The last time Joanne Brockman and I spoke on the phone—she’s my property manager, as you undoubtedly already know—she said she’d meet me here at three.” Sarah checked her watch and noted it wasn’t even two yet.

All I wanted was a little time alone, a few quiet moments to center myself. Time to remember...

It had been a long hour’s drive from her condo in Portland through the rush-hour traffic that Thursday afternoon. Even after she’d reached the more tranquil countryside with its green and brown rolling hills, her stomach had remained tied in knots. She couldn’t help thinking about her childhood. Surely it had been another world, another lifetime. When her parents had been killed in a plane crash shortly after she’d turned three, she’d gone to live with Gram and Grandfather.

“Yes, I’m aware that Joanne was supposed to meet you.” His voice pulled her back. “Actually, I’m taking over for her.”

“Oh, I see.” She didn’t see at all. Why hadn’t Joanne notified her about that?

“Joanne had to leave on very short notice,” he said, as if reading her thoughts. “She told me there is a problem in the laundry room, so I thought I’d get here early and check it out.”

“It’s just a small leak in the pipe beneath your utility sink. I put a catch basin there for the time-being. I’ll call a plumber later this afternoon.”

“Okay, thanks.” Meeting Rich’s smile, she forced one of her own. My, the man was good-looking. She couldn’t help but glance at his ring finger. Bare. Rich Stevens. The name rolled over in her mind. It had a pleasant sound. “Where’s your car?” she asked. “I didn’t see one when I arrived a few minutes ago.”

“I left it back at the office and rode my bike here. It’s a nice break from driving, and the six miles from here to town went by quickly. Besides, I’m trying to go green as much as I can. ”

“Hmm, good idea. I do a fair amount of biking myself when I’m in Portland.” Come to think of it, she had seen a bike propped up against the front porch, but she’d assumed it had been left behind by the tenants.

“So you’re a Portlander, huh?” His eyes locked with hers.

“Yes, I teach first grade at an elementary school near the West Moreland district.” She tried to ignore the sight of his lean torso and taut muscles, which were much too tantalizing. His face glowed with traces of the past summer’s tan, giving him a healthy, athletic look.

“A teacher. Good for you,” he said. “My parents were teachers before they retired.” He reached into his back pocket and pulled out a business card, handing it to her. “Again, my apologies. I should have called first.”

“No need, Mr. Stevens.” Even though you scared the ever-lovin’ daylights out of me! She gripped his business card a little more tightly than necessary. It bore the familiar red-and-white logo for Anderson Realtors.