April Heatherton, history teacher and volunteer firefighter, is determined to protect the land she holds dear, particularly the grave of an unknown pioneer woman who once trekked the Oregon Trail. Proposed logging operations are encroaching, and April soon finds herself organizing a local task force to try to stop them. Yet when April meets handsome Matt Spencer, son of the owner of Johnson Brothers Logging Company, she much reckon with her escalating attraction to him. Matt, one of a growing breed of displaced loggers, is also determined to fight for his beliefs - the right to make an honest living harvesting the timber. Can April and Matt overcome their differences? Or will their convictions forever keep them apart?

It was nearly five. April hadn't slept all night. Wrapping her bathrobe around her, cinching the tie tightly, she padded down the hall.
She needed to call Matt. Tell him she’d changed her mind about Wednesday morning. Even though she’d been counting on this opportunity to take him to the grave-site, she knew now she’d only be tempting fate by seeing him again.
Last night, thank goodness, she’d had the good sense to call an abrupt halt to their kissing. What a romantic ninny she’d been. Hadn't she learned her lesson in love the first time when she’d so recklessly given her heart to Eric?  How close she’d come to making that same, fatal mistake again.
But now it was time to get back on track. There was work to do. A lot of work. She needed to keep a clear head without images of Matt Spencer always haunting her, constantly reminding that every letter she wrote, every phone call she made, she’d be only widening the chasm that already existed between them.
Her hands trembled as she begin punching in his number. She stopped mid-way, as her courage faltered. What if she awakened him from a sound sleep? No matter. Loggers were typically early risers anyway. Besides, all she’d have to do was talk quickly, get it over with and say good-bye.
She lifted her cell phone again to continue calling. Yet her stomach twisted into a cold, tight knot, stopping her. She couldn't go through with it. No, she simply could not.

(July 2015 note:)  Please check the Books Page on this blog for a complete listing of "buy links.")

To read additional 6-line excerpts from other authors, go to http://mizging.blogspot.com
Posted by Sydell Voeller at 2:00 AM 6 comments:

"And now ladies and gentlemen, children of all ages,”  the ringmaster boomed, "world-renowned Michael Figaro will perform one of the most daring acts in circus history!  The triple somersault!"
A hush blanketed the coliseum.  The drums rolled.  From somewhere overhead, the spotlights dimmed, casting a dramatic hue over the performers.  Lisa's heart pounded.  Every nerve in her body stood on end.  Oh, Michael.  Please be careful, she silently pleaded. 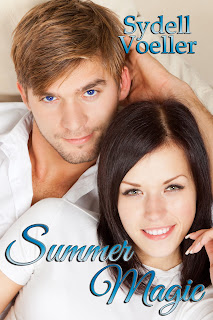 Michael dusted his hands with resin.  Then he began to swing.  The intensity was etched clearly on his face.  His taut muscles revealed the strength in his torso and upper arms.  Last year when she'd witnessed Michael's performance, she'd secretly vowed he was the most gorgeous man alive. Tonight was no exception. Higher and higher he arched.  With a quick thrust, he tucked himself into a ball and whirled through the air.
The drums stopped rolling.  Lisa felt her hands grow clammy as she braced herself on the edge of her seat. Suddenly Michael's body straightened and his hands connected with the catcher's.  The applause exploded.
"Ladies and gentlemen," the ringmaster hollered, "you have just witnessed the most important feat on the face of the earth!" While the crowds went wild, Lisa went limp with relief.
Oh, Michael, no wonder you came back, her heart cried out.  His performance was commanding.  Michael Figaro was destined for stardom.  How easy it would be to fall in love with him--only to end up heart-broken once again.  There must be at least a hundred women, watching him this very moment, who would give their souls just to touch his hand.  She could no more hold onto Michael than she had Charles.
http://www.amazon.com/Summer-Magic-Sydell-Voeller-ebook/dp/B007D0CGSO

To read more "Six Lines" from other participants in Friday Freebits, go to http://mizging.blogspot.com

Posted by Sydell Voeller at 2:00 AM 7 comments:

The lead in:  Logan, R.N., is apprehensive about allowing her little sister, Kim, who suffered a spinal injury in the plane accident that ended their mother's life, to attend a summer camp for children with physical challenges. The recommendation was first initiated by sexy Dr. Zack Dellinger, the camp director, whom Logan finds too appealing.  She silently wars against her attraction to him.  In order to keep an eye on Kim to make sure she's not pushed beyond her comfort level, Logan volunteers as the camp nurse. Her most unsettling fear, however, is centered on Kim's participation in the therapeutic horseback riding program.

Overhead, the sun shone hot and white puffs of clouds scudded across the azure sky. She inhaled deeply, unexpectedly refreshed. Thinking again about her sister's recent blush of improving health, she decided maybe all along she herself had needed some of this pristine outdoor life as well. In fact, ever since the accident, taking a vacation had been the farthest thing from her mind.

Too bad it had been Zachary Dellinger's idea that Kimberly come to Camp Rippling Waters and not Logan's. If Kimberly were to accomplish the feats of recovery he'd suggested earlier, Logan would be loath to give him the credit. Besides, last thing he needed was one more female beholden towards him, for any reason.

As the stables came more plainly into view, she stopped short and blinked. There were Zack, Betty Jo and Kim, backs turned in her direction as they stood inside facing Midnight. It appeared Kim was leaning forward, feeding the black Arabian something from her flattened palm while Betty Jo and Zack stood flanked on either side of her wheelchair.

Watching them, new dread washed over her. Why was Zack rushing this? Had his promise to her last night, a softly spoken prelude to his heated embrace, served merely as a tool to break down her resistance? Without a doubt, he was a master at breaking down a woman's resistance.

Promises, she thought dully as she forced herself to turn away and blot out the scene before her. Empty, hollow promises. Now, in the revealing light of day, what good were they?

To read more "Six Lines" from other participants in Friday Freebits, go to http://mizging.blogspot.com
Posted by Sydell Voeller at 2:00 AM No comments: